Mississippi DUI: What is an Ignition Interlock Device?

An alcohol ignition interlock device (IID) or breath alcohol ignition interlock device (BAIID) is a breath alcohol collection and analysis tool. Although seldom used a decade ago, changes to Mississippi DUI laws and the court process has led to these IID installations being the rule, rather than the exception. To learn more about first offense DUI in MS or the Mississippi DUI nonadjudication alternative or expungement option that mandates interlock installation, follow the links provided.

The electronic equipment includes a type of BAC breathalyzer that is installed in a motor vehicle, through its ignition system. The purpose of an ignition interlock device is to control the vehicle of a person under court supervision by disabling the vehicle if alcohol is present on the driver's breath.

Most car interlock systems are court-ordered as drunk driving interlock device that prevents a convicted driver from cranking the vehicle until he or she proves (by having a "clean" blow) that no significant alcohol is on his or her breath. You may ask, "Can mouthwash make you fail a breathalyzer test on an ignition lock device?" Yes, it can, if it has alcohol of any type in it.

In Mississippi, an ignition interlock for DUI probationers is highly common. Plus, if you need to further define ignition interlock device technology, consult the manufacturers' websites. In over half of all states, even a first offense DUI-DWI driver must install a DUI car interlock. 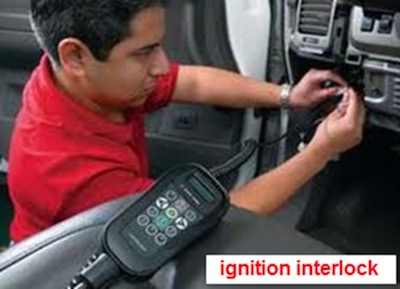 The car interlock device requires the driver to make a deep lung exhalation into a breath collection mouthpiece that is integrated into the testing chamber of the device. This sobriety check/DUI ignition lock-out technology will prevent the vehicle from starting when ethanol is detected.

Plus, after driving begins. the device signals the driver to blow again, to confirm no alcohol is present, to continue operating the vehicle. A storage data system or cell phone-based reporting system lets the IID monitoring company know of any breath alcohol content readings that exceed the threshold.

A DUI car ignition interlock is easy on some vehicles and nearly impossible on others. Under the criminal justice system rules, a court mandated breathalyzer MUST be installed to receive the restricted right to drive.

New battery-powered, electric vehicles and high-end luxury vehicles have a high degree of difficulty with DUI car ignition lock systems. Plus, each year, car manufacturers create better anti-theft technology that thwarts any "tapping into" the electrical system, whether done through a physical, wired-in connection or a Bluetooth wireless ignition system.

High on the list of vehicle ignition interlock questions of clients are these FAQs:

Mississippi DUI Lawyers Near Me for Aggressive Criminal Defense

When facing the possibility of a DUI conviction, you need experienced and knowledgeable DUI attorneys in your corner. Our Mississippi DU lawyers near me bring 70 collective years of fighting for our clients’ legal rights. Call today to 1-800-360-3847 and shift this burden off your shoulders and onto ours. Get your FREE lawyer consultation from the lawyers in Mississippi who write the books, on DUI in Mississippi.